My due date was approaching. I tried to keep calm and to put aside all the expectations about my baby’s birth. I meditated as often as possible (which I admit was actually not too often, as I am one of these persons that finds a hundred excuses before eventually sitting down). Inside of myself was the only place I truly could find and feel peace.

One day suddenly something very revealing happened to me:

I knew that since always an ancient knowledge was dwelling inside of me: The knowledge of all the women who gave birth before me; ancestral women connected with nature, and above all connected to their own spirit. Women all over the world have experienced birth since the existence of mankind. I suddenly had the absolute certainty that I had given birth in thousands of previous incarnations, that my body and soul knew exactly what they had to do and that there was absolutely no need to worry about anything.

To some, this might sound a bit New Age, but well, this is what happened. After that I felt free and completely fearless, as if a huge burden had been taken off my shoulders. It was simply amazing!

Unfortunately nowadays pregnancy and delivery are being treated like some kind of disease. It is not! Much of what we hear and the precautions we ought to take disconnect us from ourselves if we don’t take care. So, we mostly approach pregnancy and birth rather with fear than with joy and confidence.

Just think about all the movies where women are lying on a bed, sweating and screaming from the tops of their lungs during labour, while someone shouts at them “Push, puuuuush!”.

It does not have to be like that. If the checkups turn out fine, the mother is healthy and the baby is in the right position, there is not much to worry about. It is the most amazing thing a woman can go through, however the experience might be. Nobody can ever take it away from you, as only you really know what it feels like, because every pregnancy and delivery is unique.

My doctor had calculated the expected date of delivery for 4th November; I thought that it would be rather cool if the baby would come on 01.11.2011. But the baby did not agree with me. On the morning of 29th October I had sometimes pulling sensations in my abdomen. On my multiple internet researches I had read that some days before labour the body starts to prepare itself and it described this kind of sensation. That was probably it.

How are you supposed to know how something feels like if you never felt it before?

The sensation came and went from time to time all day long, but I didn’t pay too much attention to it. However, I realized that in a few days the baby would be born. In the evening, the intervals were every time shorter and I thought that maybe tomorrow or the day after I would be a Mum.

That day the alcoholic midwife’s husband had come to visit and we were sitting in front of the TV watching one of those stupid Bollywood movies, that doesn’t make much sense.

Well, by the evening, those light contractions were getting every time shorter and I started to suspect that the baby was on its way.

The day I met the midwife she had talked a lot about the importance of an enema, which seemed to be an indispensable item she needed to assist me and that I had to buy together with all the injections and painkillers she had written down for me. I never had an enema administrated before and the thought of it made me shiver. I even had nightmares! Maybe this is why I suddenly had constantly the feeling that I had to go urgently to the toilet. So I was going in and out of the toilet without any success, while the men were sitting in front of the TV screen absorbed in the movie.

“Excuse me!” I said during one of my toilet walks

“Maybe it would be time to go and get your wife?”

So the midwife’s husband jumped on his motorbike to fetch his wife. I asked Baba to bring a bucket into the room, just in case. I really wanted to stop going to the bathroom: I didn’t want to have to tell my child some day something like

“Well, my child, you were born into an Indian squat Toilet…”

As soon as the guy left, the sensations became more intense. I call them sensations, because it was not really painful. I imagined them to become stronger and less bearable, but they didn’t. I had other type of cramps due to a bad stomach in other occasions that were much worse than what I was feeling at that moment.

Then, suddenly my body took over and did it all alone without my interference. I did not do anything by my own will, my body knew better, and so I followed its instructions and let everything happen. Mentally I was in some kind of lucid trance, which is difficult to describe.

I went to our bedroom. Baba kind of seemed not to know very well what to do and how to help me, as I told him to just let me be. Thus he went on watching TV observing me from the corner of his eyes. Suddenly I shouted at him

“Turn the stupid TV off and come here!”

I didn’t want to welcome the child with some hysterically screaming women and fighting Bollywood heroes in the background.

My body had adopted a half squatting position and I just had time to tell Baba that I thought that I could feel the head and a moment later he held the baby in his hands! Only about ten minutes had passed since my body had taken over control.

What better start into life could there possibly be than being caught by the hands of your own loving father?

We sat on a blanket on the floor leaning against the cupboard holding our little daughter in our arms. There we sat, in silence, amazed, incredibly happy and were unable to take our eyes away from this perfect little creature that had just emerged from my body. She was not too small like the doctor had predicted and all was in its place. Everything was in perfect harmony!

One thing I could not exactly find out on google was where to cut the umbilical cord, but I had read that it was actually good to not do so straight away and that some people even kept the placenta in a pot carrying it around with the baby until the cord fell off by itself. Thus, I was not worried about that.

Some minutes later the midwife dashed into the house, sober and SHOCKED! An endless stream of words bubbled out of her mouth:

“Oh my god! What are you doing, why are you sitting, you have to lie down, what happened, you people, blablabla…”

Man, what was her problem? I looked at her blankly and shrugged, thinking that it was my good luck that she hadn’t come in time. She would most probably have driven me crazy! All was the way it should be, at least for us! She explained Baba how to put the threads around the cord and where to cut it and then she checked on me. That was it, her job was done.

After that I took a hip bath in hot water with brandy. I even had a small sip of the brandy as recommended by the nurse and I have to say that it really felt good. I didn’t feel tired or anything, but was more in a party mood instead. There I sat in my blue plastic tub filled with brandy-water, with a glass in my hand observing how she cleaned and dressed the little girl. After the men had each a glass of brandy and she drank the rest of the bottle.

Bringing a child into this world was the most enriching and overwhelming experience I have ever had. If I was able to do this, I was able to do whatever I wished in this world. It made me feel sort of almighty and immensely proud of myself. 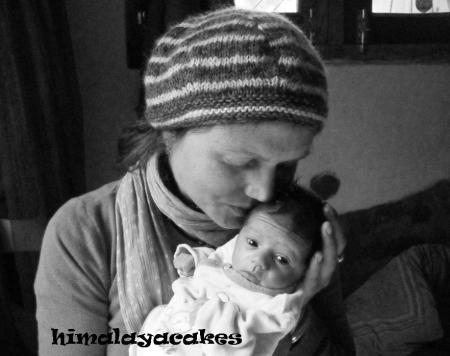 I think I have not mentioned that some years ago I had to undergo a cervix operation. They had to cut out a pretty big piece. It was the beginning of a cancer caused by the HPV virus. I defeated the virus and the following routine checkups turned out fine, but I have been told that I might not be able to have children and that getting pregnant or carrying out a child would be very problematic. I just wanted to share this information to let women, who might be affected by the same problem know, that they don’t necessarily have to despair.