Yes, in India everything is pretty cheap; at least if you have a western salary. But when you have to earn your living in rupees, things look very different.

Sure, we didn’t have to pay a rent anymore, but like everywhere else, there were bills to pay and still plenty of things to finish in the house. As you can imagine, we did not get really far with renting only one room to travelers; the tourist seasons here are short and it was impossible to put even one single rupee aside for surviving during the off-season. The last of my savings were shrinking drastically, too.

However, necessity is the mother of invention. 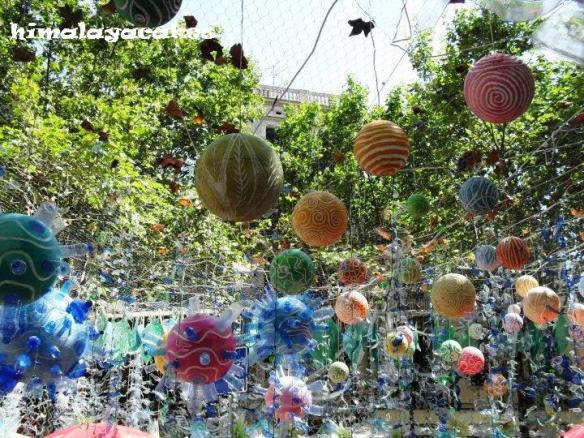 We started to organize Jam Sessions at our place, cooking and selling our tasty home-cooked food. Sometimes our narrow terrace was so crowded that people had to squeeze tightly together. Usually people brought their instruments along and some of the parties were really amazing. Other times our guests waited full of expectations for the music to begin, the only problem was that nobody had brought an instrument; in which case the jam-session was spontaneously transformed into a movie night in our living room.

Nevertheless it was never enough income and I had to rush back to Europe to make some money. The crisis had started there and people were discouraging me considerably regarding the chances of finding a job.

But I was lucky! Not even two weeks had passed and I received an acceptance letter from the first job interview I had in a telecommunication company. I was aiming for something temporary, but the company was looking for people seeking regular employment. I agreed and few days later I started working in the call-center. I felt guilty in the beginning, as I had not the slightest intention of doing that job longer than a few months. But I could not afford to not take this job and decided to put my needs in first place. Who would actually care if resigned? Does any big company really care about the personal needs of their workers? Their interests are numbers; and so were mine.

When they first showed me my future workstation, I caught my breath! To me it looked like a scene from a science fiction movie: A huge, grey office-cube consisting of countless rows of seats where people were plugged onto the computer system with their headsets.

I just came out of the jungle and by now was used to see the blue sky over my head, feel the sunbeams caressing my skin, the green grass tickling my naked feet and the wind brushing through my hair throughout the day.

“Only some months, You can do it!”

I told myself again and again. It’s amazing, humans are creatures of habit and soon I accepted and got used to my new situation.

The job itself was of course not really fulfilling, but the company was pretty cool. I got food tickets to spend in the food-court which belonged to the office compound where I stuffed myself daily with pizzas and other western food which I haven’t had for many months. All of the employees were young people from all over the world and the working atmosphere was friendly and casual. With some colleagues I got along very well; there was only one problem:

I WAS LEADING A DOUBLE LIFE !

As I had signed a contract of employment of indefinite duration, I couldn’t tell anybody about my intention to quit in a few months. Neither could I tell anybody much about my private life; living in the Himalayas and married to a sadhu. Therefore I tried to keep conversations simple and if somebody asked me by chance if I was in a relationship, I limited myself by answering “Oh, it’s complicated” – which, it was indeed.

My intention was to go back to India in three months after having saved some money to bring back. The thing is that saving money in the west is not easy. In Spain salaries are low and in Barcelona life is expensive. I spent much money for public transport, food and other necessary things. Of course, I also wanted to meet all my friends there and every time I had a coffee or a beer I was calculating for how many days I could buy food in India with the money I had just spent for a single drink. Few things are free in Barcelona; there is the beach and a few street festivals; anything else costs money. I was lucky enough that my best Spanish friend hosted me in her flat and I really enjoyed all the time I could spend with her and her flatmate.

I also could go on paid holiday like a normal employee and went to visit my parents, who live in a small village in the south-west coast of France and in the end of the year I spent some quality time with my sister’s family in Germany.

In the end I had to work six months in Barcelona to save at least a bit of money. I also found out that only few workers actually stayed in the company longer than a year and I didn’t feel that guilty anymore about my little lie. The day I quit they asked me for the reason and I answered that I would go back home. For them it was clear that I meant Germany, but while saying so, I pictured in my head the beauty of the Indian Himalaya peaks.