It was so hot, that we ended up sleeping all together on the roof top under the open sky. In the middle of the night the monsoon surprised us and the whole lot of us grabbed our blankets and drowsily went down to the rooms for shelter while large bats were flying across the open patio. Pagli and I slept together with our little caretakers on a large bed. 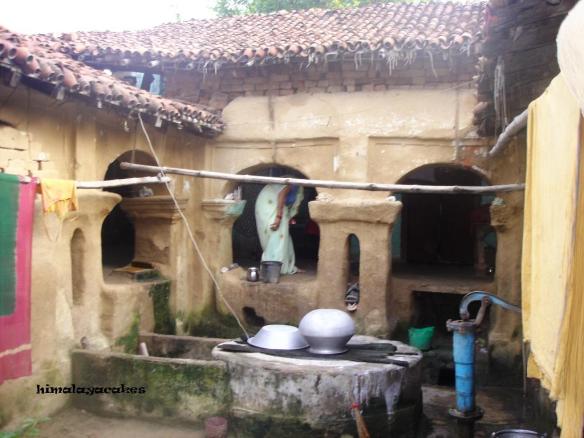 I woke up expecting to have a more peaceful day, as it seemed that all the village inhabitants had already come to stare at us “weird” Westerners for a while the day before; hopefully to their entire satisfaction.

Well, maybe the greater part of them did; the thing is that the voice about two white ladies had spread to the surrounding villages and by the time we were having breakfast we were watched again by an even bigger crowd than we had staring at us the previous day!

I think this was the moment when I internalized an important lesson:

In India it is better not to have any expectations all. Good and not so good surprises lurk behind every corner just waiting to jump on you! Every single thing usually turns out quite different from how it should have – sometimes much better than expected; or well, much worse….

…and what fascinates me pretty much about human nature, is how we manage to get used to all kind of circumstances and routines relatively quickly. It did not bother me that much anymore to have all those strangers at a short distance observing every detail about how I stuffed my Indian breakfast into my mouth, as if I were doing something absolutely amazing, like for example swallowing a box of nails.

After breakfast we decided to visit the village temple, just to get a bit out of the house in which we were trapped; of course, we were followed by a large crowd. I think the temple never had before that many visitors at once since its construction, not even on Shivratri!

Pagli and me were trying to go along with the joking and laughing kids that jumped excitedly around us, when suddenly a boy with a wicked gaze came up to me and kicked me hard in the leg. I have no idea why he did it; maybe he thought he’d better make sure in case we were a sort of ghost or he just didn’t like me. 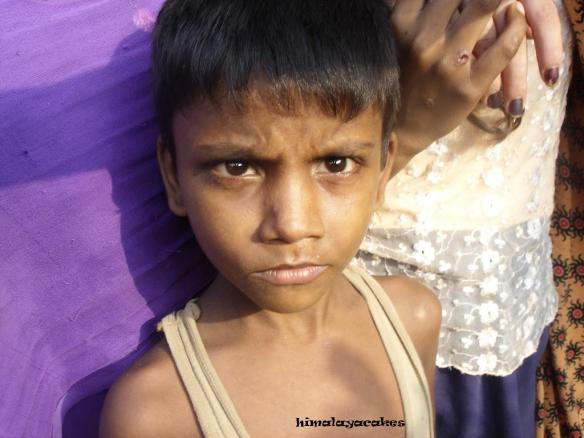 The boy who kicked me

We thought it was a good idea to make a gift to the girls that took so good care of us, they were constantly with us, fanning us with palm leaves and making sure we were as happy as possible. When we went back in the house we went through our bags. We gathered some fancy jewellery and make-up items that we distributed among the girls; which turned out to be a big mistake! Soon all the kids were fighting with each other, grabbing the things out of each others hands and complaining loudly that they also wanted this item and not the one they got. Baba’s niece ran back to her house crying complaining that the other girls received so much nicer things than she did from the westerners, she came back with her mother and a big drama started to develop.

The 103 year old dying grandfather we had come to visit was still in the same state. He got to see my husband, his youngest grandson one more time, which was one of his wishes to be fulfilled before he died. 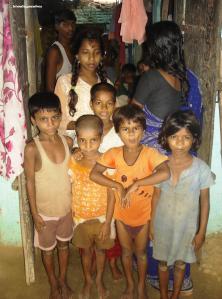 Actually we had planned to stay longer in the village, but things were getting really intense and on the fourth day of our visit, with a sugar rush for having had farewell-chais in most of the family houses of the village, we took our backpacks and walked out of the Bihari village to reach the bus stand by walk at one kilometer distance.

I looked behind me and the German story of the Pied Piper of Hamelin, who led the rats out of a village by playing his flute, came to my mind; a never-ending line of villagers was walking right behind us to say goodbye; they stayed with us waiting until the bus left and merrily waved at us as we drove off.

These four days which I will never forget felt like four years to me! So many incredible things happened in such a very short time, many situations were pretty tough, others just amazingly beautiful!

I learned so much about people, life, love and most of all about myself.