Sita Ram found us having breakfast and ordered a potato parantha and a chai while he was giving his usual morning grouching-speech; on our behalf, of course. Again he decided to come with us on our walk.

We climbed over rocks and stones and suddenly stood in front of a small cave entrance. A local who passed by with his donkeys, who were carrying rocks explained that a Russian Sadhu was living there. Unfortunately the door was locked; I would really have liked to meet the Russian spiritual man. 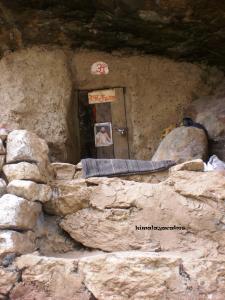 We followed a small path when all of a sudden it started raining. A voice called us over, coming from an old Sadhu who was sitting at his fire pit under a ledge. I wondered why we had not noticed him earlier. The old man offered us chai. He even had real cow-milk, it was the best chai I had in all of Gangotri! His English was pretty good and he told me that for the last thirty years he had been living most time of the year in Gangotri, but due to the isolation and the rough climate conditions he was forced to spend some months further down in the valley. It was very pleasant to enjoy a good, hot cup of tea while chatting with the Sadhu. I marvelled at the beauty of nature; the rains had turned the rocks into glimmering silver.

A Russian couple, who was in search of the Russian Sadhu came through the rain out of nowhere an joined us. We talked little; everybody seemed to be absorbed by the amazing landscape.

When the rain eventually stopped, we thanked the old Sadhu and started our descent where we met another interesting figure; a Nath Sadhu jumped on the path from behind a bush.

I almost got a heart attack!

His long, thick dreadlocks were knotted together high upon his head. He wore nothing but a tiger patterned loincloth and many heavy malas. His entire body was smeared with ash, he held a brazen trishul in one hand and a Baba-bag hung over his shoulder. We ended up crouching in a circle on the side of the trail; the Tiger-Loincloth-Baba passed a chillum and the three holy men had a vivid conversation in Hindi. He spotted my digicam and his eyes became big as saucers. He started rummaging in his Baba-bag and pulled out a cellphone and a digital camera.

“I have a Sony Camera, 4 megapixel, very good quality! My cellphone inside also have one camera.”

This was the last thing I had expected from this particular Sadhu and I had to fight pretty hard to stifle a laugh.

Like that we spent several days in Gangotri; with Sita Ram Baba at our side. There was no way to get rid of him; the only moments I spent alone with my husbands were at night inside of our room.

What a great honeymoon in company of Rumpelstiltskin!

Time had come to leave, but before that we wanted to visit the temple, which receives countless pilgrims every year. At the market Baba and I bought a plate with offerings for the goddess that contained kajal, bangles, a comb, a small mirror, coconut and a variety of sweets. Happily we approached the main temple and I wondered what had happened to the large queue that normally lines up in front of the entrance. Cheerfully I walked in with the plate of offerings in my hands. The pandit spotted me and snarled at me

“Now no godtime! You chalo! Fast!”

and shooed me away. Bewildered I looked alternately at my plate and back to the pandit. What was that? This was the first temple I visited in India where god apparently observed a timetable.

We waited for some time and eventually went to a smaller, secondary temple nearby. Confused I followed a line of women into the building. In Hindu temples, everything happens really fast; at least during the pilgrim season. Most of the time you don’t have time to take a proper look at the resident deity and before you even start understanding what is actually going on inside of the temple you suddenly find yourself outside of it again. I guess this is why I like the gurdwaras so much, there is always a place where to sit down to let the incredible vibrations rain down on you.

Anyways, it was my turn, the pandit blessed my offerings and after only a couple of seconds I stood again outside of the temple. In all this rush I forgot to hand over my 20 rupee donation, the bill was still sitting on my plate. I sighed and went to undergo the whole procedure again. Back in the temple I put the money next to the deity’s figure and the pundit eventually blessed me, too, marking my forehead with a vermilion tilak.

4 thoughts on “Honeymoon With Rumpelstilskin Part 2”